In 2000 Free Street began a program mentoring teens in the production of a theater season facilitated by Bryn Magnus.  The teens named it PANG, an acronym for Producing Arts for a New Generation.  Teens curated the season, booked the artists, designed the publicity materials, wrote press releases and contact the press, set up the technical aspects for the theater, and ran the box office. PANG produced four seasons of work from 2000-2004.  The shows are included in the Performance Archive.


From first PANG brochure:
PANG is an ensemble of 8 teen produces craving wild art and new theatrical forms.  We want to go beyond mas media fodder and present work that is unique, challenging and risky.  PANG is a TeenStreet jobs initiative and one of Free Street's body of creative programs.  Free Street opens the potential of youth through inspired arts education.  With Producing Arts for a New Generation, Free Street is expanding to include innovative training in the business of art. Free Street's philosophy directly relates creative development to quality of life, passion, curiosity, and motivation. PANG's hope is that the artists we host will expand our aesthetic knowledge, and create a new audience for interesting performance work.

Five teenagers slouch on the furniture in the Pulaski Park field
house, gossiping, joking, and talking about getting some junk food
to ease the late afternoon munchies. Kelley Minneci shares her news:
she just found out she's been accepted into the acting program at
NYU. Congratulations are offered all around. And then it's down to
the business of show business.

The kids are all inaugural members of PANG--Producing Arts for a
New Generation--a program run by Free Street under the direction
of playwright and performer Bryn Magnus. Where most youth theater
programs--including Free Street's own TeenStreet--focus on acting
and writing, PANG teaches its eight participants how to produce,
curate, promote, and do all the nuts-and-bolts work necessary to
get a performance in front of an audience. As far as anyone at Free
Street can determine, it's the only program of its kind in the U.S.
Magnus, who's worked with Jellyeye, Curious Theatre Branch, and
other alternative performance ventures for over a decade, is
intimately familiar with the challenges of shoestring production. "We
really have to get the rest of these postcards out to get good houses
for these last two weekends," he reminds the group. "So everyone
needs to take a stack and hand them out around school."

The other tasks for the day include making a thrift-store run for
bedsheets to use as backdrops for the upcoming performance,
writing thank-you notes to past performers, and conducting a
makeshift rehearsal for this week's artist, Canadian dancer choreographer
Shirka Urechko. Urechko's piece is second to last in
this year's series. But that doesn't mean the work will stop soon.

"We have to start learning how to give presentations to corporations
for funding," says Magnus. "We really have to get into this
marketing-sales thing this summer, doing the corporate pitch, but
coming at it creatively."

The afternoon's work is divided up. Minneci agrees to get the sheets,
while JoJo Klonsky, Mariana Barajas, and Dinorah Jimenez start
writing letters.

Magnus and Leo Asuncion move downstairs to the gymnasium,
which is littered with crayons and tiny chairs from the preschoolers
who share the space. They meet Urechko, and start setting up for
her rehearsal.

But producing is never a smooth operation. As Asuncion starts up
Urechko's music, an irate Park District staffer storms in. According
to her, PANG isn't supposed to be in the space until after six.
Magnus gives a weary smile and heads back upstairs to work out the
conflict.

Free Street's artistic director, Ron Bieganski, says PANG was started
because "we'd get wonderful, creative kids [auditioning for
TeenStreet] who just weren't performers. We'd be auditioning 150
kids for 20 places. We thought this would be a good way to keep
them involved in theater."

Though some of the visiting performers came to the series (which
has been running since January) through Magnus's many fringe
theater connections, others were found and pursued by the PANG
members. "We'd search on-line," says Minneci. "Or through other
contacts and networks that we had," adds Klonsky. Each member
serves as the primary contact for at least one artist in the series (ten
different performances were slated for this first season), and the
other tasks--from running lights to staffing the box office to writing
press releases--are divided up equally. The group meets on
Tuesdays and Thursdays after school and on Saturday afternoons,
with performances on Friday and Saturday nights.

Each visiting artist also leads a performance workshop for the PANG
members. None of the work is particularly geared toward youth
issues, and that suits the group just fine. Says Asuncion, "What was
appealing about this to me was the idea of getting adults and youth
into the same theater, and seeing something other than Saturday
Night Fever."

Says Bieganski, "They're taking the responsibility for their own
education and their own entertainment. They've been bombarded
with such crap. They don't even get real rock 'n' roll anymore--just
these prefab groups. What we're doing with them is creating the
passion for the art first, and then saying, 'If you want to do this,
these are the skills you need.' A small arts business is as tricky to
run as any business." 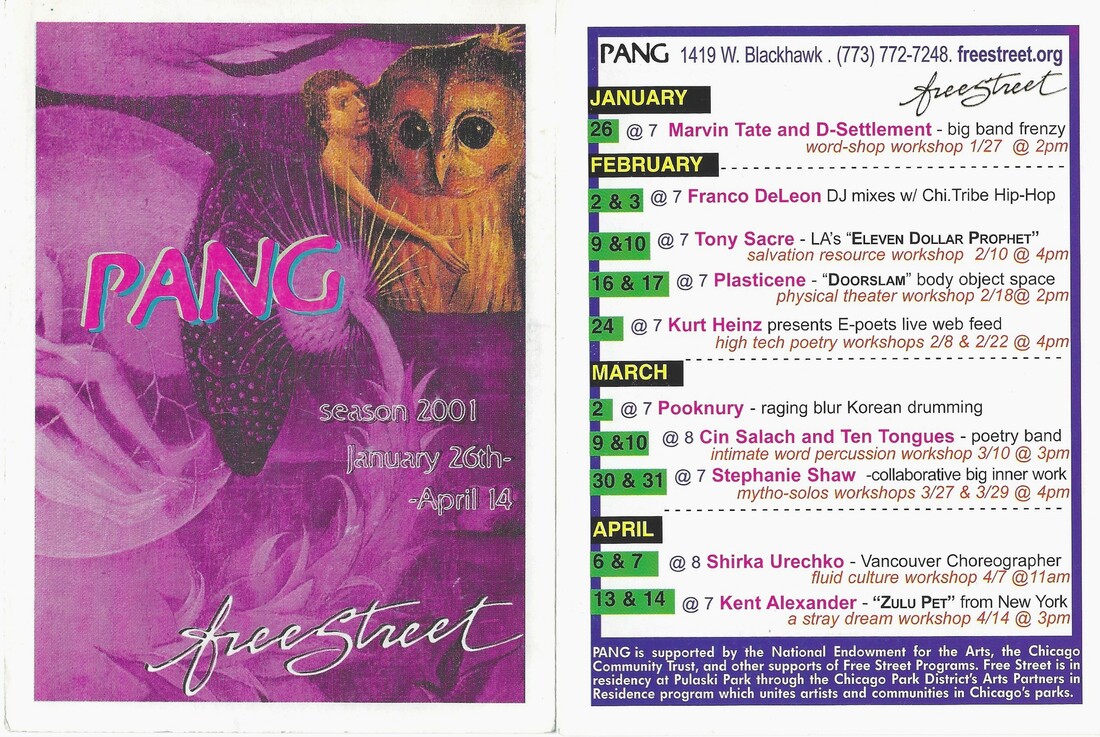 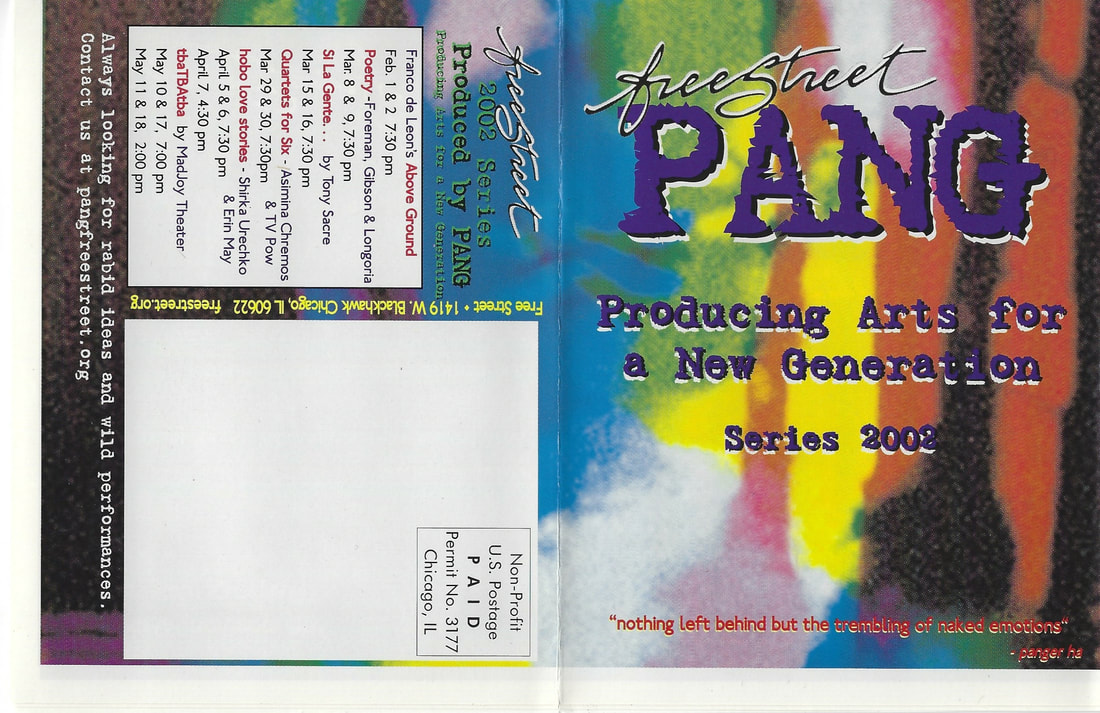 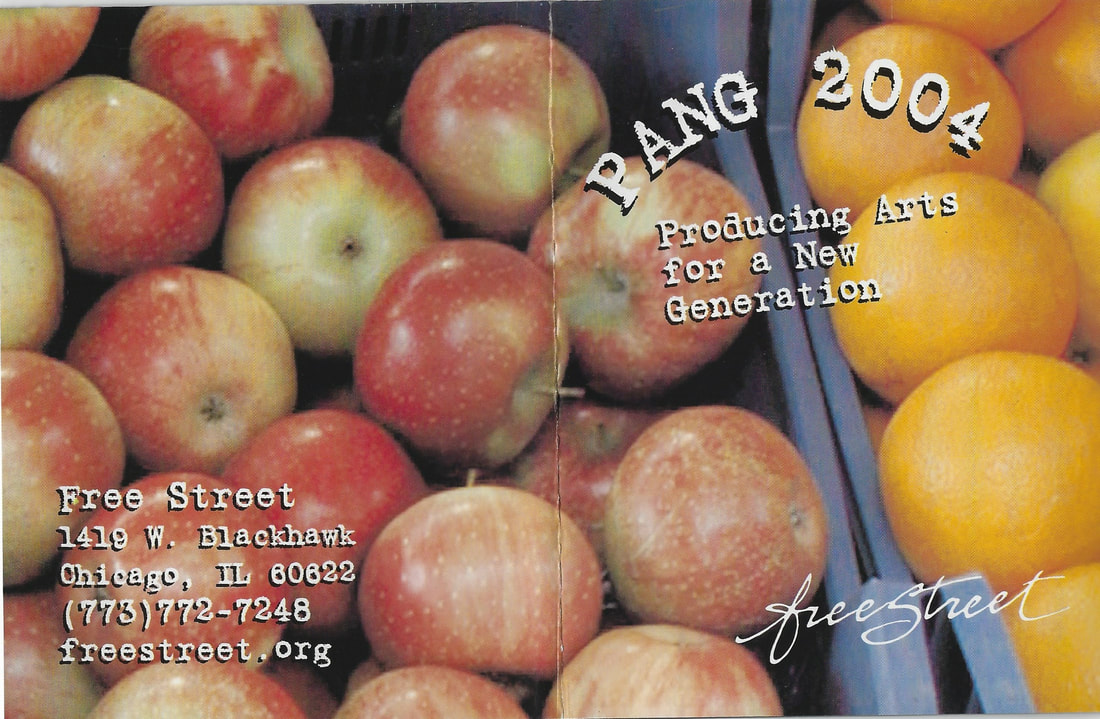 Memories of PANG from Bryn Magnus

I don’t remember exactly when in 2000 or 2001 that I was speaking with David Schein at Lunar Cabaret. He was asking me about Beau O’Reilly because Free Street had just been awarded a three year audience development grant from Theater Communications Group. David thought Beau might be a great fit to run that program at Free Street. At some point in the conversation I may have said, ‘What about me?” Or it’s possible that David asked outright if I would be interested. And I was and so I assumed the role of program director of what would become PANG—Producing Arts for a New Generation.

The idea was to form an ensemble of youth artists who were also interested in learning how to produce a season of performances. In parallel with the general Free Street call for teen participants, we put out a call for teens interested in producing. The first PANG ensemble was Leo Asuncion, Mariana Barajas, Denise Hernandez, LaMya Holley, Dinorah Jimenez, Jojo Klonsky, Kelley Minneci, and Terri Montes.

One of our first tasks was to name the ensemble. We brainstormed and did writing exercises to try and describe the idea behind the ensemble—to create new audiences for interesting and relevant performance work. My memory, which could be totally wrong, is that Leo came up with PANG—producing arts for a new generation. Everyone loved it and that is what we became.

We developed a framework for what we were looking for when looking for ‘interesting and relevant’ work. Then we searched for artists through word of mouth and online. And as we found artists we reached out to them with invitations to be part of our season. When artists agreed, we created contracts and got them signed. Once we had the commitments in place we worked with Anita to design a brochure and press releases. All decisions were made collaboratively by the ensemble. And on performance nights, we worked together on load in, set up, lights and sound. The whole stage management package.

The TCG award was for three years 2001, 2002, 2003, and PANG’s final season 2004 was supported by other funders. With each season, and each new ensemble, we learned more and got better at producing. We partnered with the Chicago Department of Cultural Affairs and PAC/Edge Fest to give the ensemble a sense of where the skills they were learning might take them.

Toward the end of the PANG program, the ensemble began to morph into creating original work. That’s how Angel in Moloch came about. Within the 2004 ensemble, we began discussions about spiritual exploration, states of ecstasy, and the dangers those things pose to young people in rough and tumble Chicago neighborhoods. We read Allen Ginsberg’s Howl and discussed drugs and those kinds of altered states. Playwright Idris Goodwin was a guest artist in that ensemble and the discussions became creative explorations of ideas around states of ecstasy and how to navigate spiritual growth in a highly material realm.

The ensemble was also participating in the regular Saturday workshops so they had grounding in Ron’s release approach.

One of my strongest memories of that show was Corey Keiloloe—his profound stillness upstage center. It was a powerful counterpoint to the choreography and dialog going on around him. I think he stood still and silent for as long as 40 minutes before moving downstage. Many people in the audience remarked on the power of that stillness.

The final performance for PANG was a collaboration with Columbia College. Brian Shaw and I co-directed an ensemble of 10 Columbia College theater students and 10 Free Street teens. We worked over the summer of 2004 and to develop Recyclone. Brian Shaw had become very alarmed at the waste of bigger theater companies that threw away enormous amounts of wood and set materials after their shows closed. There was no recycling. So we reached out to the Goodman and Steppenwolf and Columbia College even to be alerted when they stuck their sets so we could gather the material.

With the materials we gathered we created these great catapults and other contraptions that were very popular with the public park kids.